In the twelfth and thirteenth centuries, the Knights Templar helped the Portuguese in the battles against the Muslims, receiving as a reward extensive areas and political power. The castles, churches and villages thrived under its protection. In 1314, Pope Clement V of French origin and Philip IV of France, tried to completely destroy this rich and powerful order (murders, absorption property, atrocities, that would lead Fernando Pessoa to affirm the continuing fight against tyranny, Ignorance and the fanaticism, he said, the three killers of Jacques de Molay, Grand Master of the Order) and Dinis succeeded in transferring to the Order of Christ the properties and privileges of the Templars. 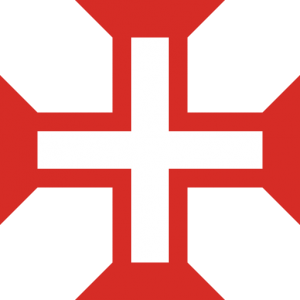 The Order of Christ was thus created in Portugal as Ordo Militia Jesu Christo by Ad bull ae exquibus of March 15, 1319 by Pope John XXII, and King Dinis, shortly after the extinction of the Temple. “It was refound the Temple that previous papal bull of Clement V had condemned to extinction” .

Says the same obra2: “In Portugal, the assets of the Templars were ‘reserved’ on the initiative of the king, moving to the crown between 1309 and 1310, while stemmed the ‘process’, not without the monarch rejected the administrator appointed by Clement V – Stephen Lisbon. These same goods were free for the new congregation in November 26, 1319, and the Pope granted the exception to the kings of Castile and Leon, Aragon and Portugal, coalescing to counter the implementation of the measure which ordered his transfer to the Order of the Hospital. ”

The new Order thus emerged as a reform of the Templars. Everything has changed, to become more or less the same. The habit was the same, the brand also, with a slight change, and property, transmitted by the monarch, corresponded to the Templars goods. “He was given the Cistercian rule ‘remains the same Encyclopedia,” and named Master D. Gil Martins, also master of the Order of Avis, which had adopted the Cistercian rule, with the determination that the new monks elect its own master, after the death of that. The spiritual superior of the Order of Christ was the abbot of Alcobaça. ”

The June 11, 1421, a chapter meeting in Tomar adopted as a rule of the Order of Christ of the Order of Calatrava, which resolved any outstanding issues of a spiritual nature and obedience, keeping in cavalry ball.

The Order of Our Lord Jesus Christ was originally a religious and military order, created March 14, 1319 by the Papal Bull Ad and former quibus of John XXII, which thus acceded to the requests of King Dinis. He received the Order name of Our Lord Jesus Knights Cristo1 and was heir to the property and privileges of the Temple.

In May of that same year, a solemn ceremony was attended by the Archbishop of Évora, the Ensign-Mor United Afonso de Albuquerque and other members of the royal curia, King Dinis ratified in Santarém, the creation of New Order.

Was granted to host the castle of Castro Marim; but in 1357 the seat had already been installed in Tomar, the former headquarters templária2.

The post master had spent after 1417 to be exercised by members of the Royal House, which passed to appoint directors and governors by papal appointment.

The first was Prince Henry, “who referred to what appeared to be his” mission “initial, the conquest of Asia, across the maritime travel, the order itself funded.” 3

The ideals of Christian expansion rekindled in the fifteenth century when its Grand Master, Prince Henry, invested the Order of income in offshore exploration. The emblem of the order, the Cross of the Order of Christ, adorned the sails of the caravels that explored the unknown seas.

The result is that in 1454 and 1456, by bulls of Pope Nicholas V and Pope Callistus III respectively, is granted or given obligation to the Order of Christ to establish the spiritual duty on all discovered lands, territories nullius as diocesis, and his diocesan seat the Church of Santa Maria do Olival in Tomar.