The Order of the Temple had its origin in the East, with the objective of giving assistance to the pilgrims who headed to the Holy Land and the respective worshipping places. Therefore, the Knights of the Temple had direct access to these places of which the Holy Sepulchre, Jesus’ Grave, and the Dome of the Rock were the most significant.

Soon after, reproductions of these constructions were built in many different places, to remind people of these sacred monuments.

By reconstructing temples that reminded people of the sacred places of Jerusalem, the faithful did not have the need to make sacred journeys to the Holy Land once these were seen as the Holy Sepulchre itself, which made complete sense in a Europe “dominated by faith”.

Being considered the moiment of Jesus Christ, the Holy Sepulchre was many times seen as the centre of the world during the XII and XIII centuries and sometimes during the XIV century.

The city of Tomar and its Charola are considered to be a reflexion of all this. 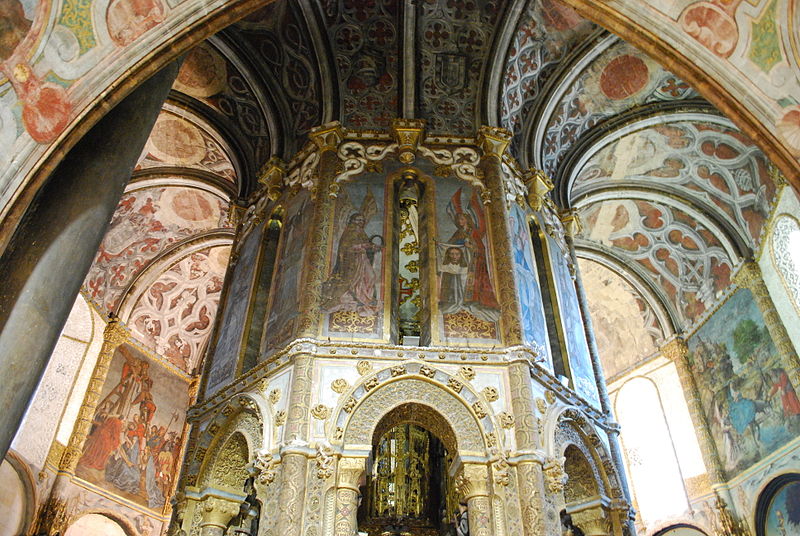 The Charola was the private oratory of the Knights, inside the fortress. Their typology is common Byzantine churches, which returns to integrate the Romanesque with the movement of the Crusades.

This type temple is based on a plant develops around a central space which, in Templar roundabout has the shape of an octagonal prism, or drum, which divides into sixteen paramento faces on the ambulatory, thereby closing the measurements of the building. Completed in 1190, the Rotunda had to turn to the east entrance. Were the works of Manuel I that established the south, the ship that expanded the church, extramural castle.

Already with the castle headquarters of Christ’s knights, Prince Henry, governor and the Order of the mayor from 1420 to 1460, will make the first changes in Templar roundabout in order to provide it with the space requirements to then unfold the liturgical functions of the branch of contemplative monks however he introduced the Militia of Christ. To do this it will open two large windows in the regalia of the two spans of ambulatory facing west, and then install there, pendorado the masonry a chorus of wood. At the same time is open four chapels in the ambulatory walls oriented NE, NO, SE and SO. In the remaining spans install altars surrounding the ambulatory.

With the expansion of the liturgical space by King Manuel I, the woodwork of the Infante are removed and the legs of the big windows are definitely killed to make room for the will of the triumphal arch that articulates the Templar space with the Manueline nave. The Rotunda then will function as the main chapel of the new convent church. Will be enriched with work of sacred art that included sculpture, painting on wood and on leather, mural painting and stucco. Particularly important was the discovery, today, of Manueline paintings dome of ambulatory, and had been covered with lime at a later time the earthquake of 1755, whose effects were felt in the building. Its restoration took place between 1987 and 2014.