The Romanesque round church is a Roman Catholic Church from the castle (charola, rotunda) was built in the second half of the 12th century by the Knights Templar. From the outside, the church is a 16-side polygonal structure, with strong buttresses, round windows and a bell-tower. Inside, the round church has a central, octagonal structure, connected by arches to a surrounding gallery (ambulatory). The general shape of the church is modelled after similar round structures in Jerusalem: the Mosque of Omar and the Church of the Holy Sepulchre.

The capitals of the columns are still Romanesque (end of 12th century) and depict vegetal and animal motifs, as well as a Daniel in the Lions’ Den scene. The style of the capitals shows the influence of artists working on the Cathedral of Coimbra, which was being built at the same time as the round church.

The interior of the round church is magnificently decorated with late gothic/manueline sculpture and paintings, added during a renovation sponsored by King Manuel I starting in 1499. The pillars of the central octagon and the walls of the ambulatory have polychrome statues of saints and angels under exuberant Gothic canopies, while the walls and ceilings of the ambulatory are painted with Gothic patterns and panels depicting the life of Christ. The paintings are attributed to the workshop of the court painter of Manuel I, the Portuguese Jorge Afonso, while the sculptured decoration is attributed to Flemish sculptor Olivier de Gand and the Spaniard Hernán Muñoz. A magnificent panel depicting themartyrdom of Saint Sebastian, by Portuguese painter Gregório Lopes, was painted for the Round Church and now hangs in the National Museum of Ancient Art in Lisbon.

During the administration of Prince Henry the Navigator (first half of the 15th century), a gothic nave was added to the round church of the Convent, thus turning the round church into a church apse. From 1510 onwards, King Manuel I ordered the rebuilding of the nave in the style of the time, a mix of late gothic and renaissance that would be called Manueline style by art historians. The architects involved were the Portuguese Diogo de Arruda and the Spaniard João de Castilho.

From the outside, the rectangular nave is covered by abundant Manueline motifs, including gargoyles, gothic pinnacles, statues and “ropes” that remind the ones used in the ships during the Age of Discovery, as well as the Cross of the Order of Christ and the emblem of King Manuel I, the armillary sphere. The so-called Window of the Chapter House (Janela do Capítulo), a huge window visible from the Saint Barbara Cloister in the Western façade of the nave, carries most of the typical Manueline motifs: the symbols of the Order of Christ and of Manuel I, and fantastic and unprecedented elaborations of ropes, corals and vegetal motifs. A human figure in the bottom of the window probably represents the designer, Diogo de Arruda. This window of the Convent constitutes one of the masterworks of Manueline decoration. Above is a smaller circular window and a balustrade. The façade is divided by two string courses of knotted ropes. The round angle buttresses are decorated with gigantic garters (alluding to investiture of Manuel I by the Order of the Garter by the English king Henry VII).

The entrance of the church is done through a magnificent lateral portal, also decorated with abundant Manueline motifs and statues of the Virgin with the Child as well as the Prophets of the Old Testament. This portal was designed by João de Castilho around 1530.

In the interior, the Manueline nave is connected to the Romanesque round church by a large arch. The nave is covered by beautiful ribbed vaulting and has a high choir that used to have Manueline choir stalls, unfortunately destroyed by invading Napoleonic troops in the early 19th century. Under the high choir there is a room that used to be the sacristy of the church. 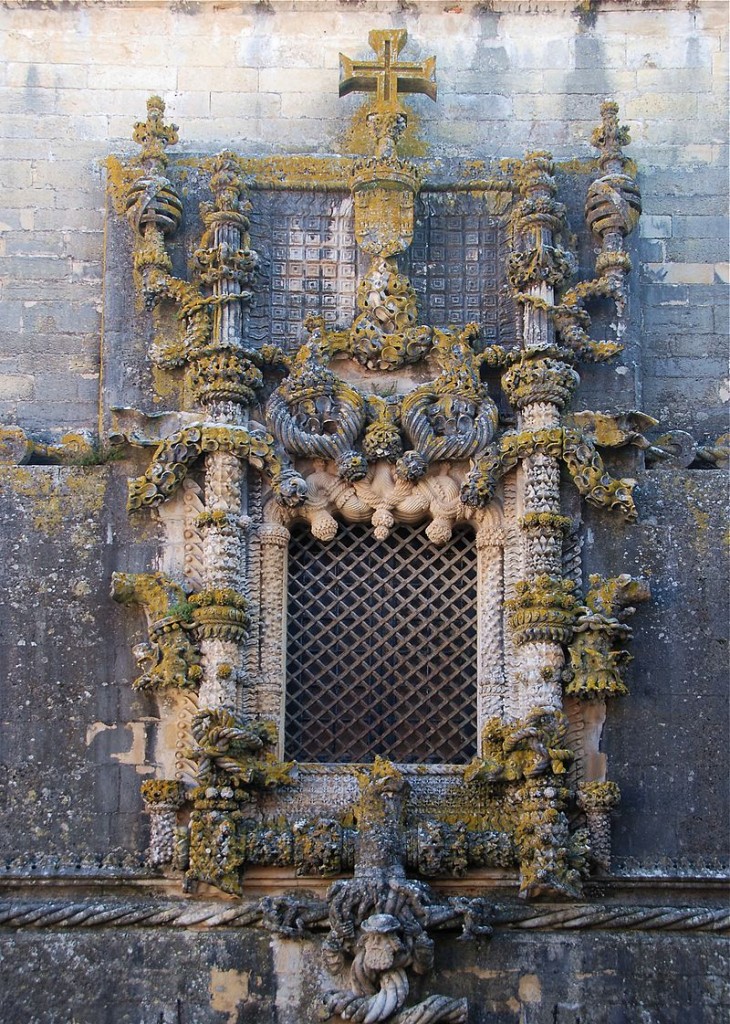 Its window is the famous Chapter House Window already mentioned.