Afonso Henriques made history because it had a well defined objective, promised Bernard of Clairvaux who conquered Santarém to the Moors, send to build a monastery for the Cistercian Order in Portugal, which has thus fulfilled.

Date back long before that, however, the initiatives of King Afonso Henriques, to promote the defense of the realm, especially when it came to Lisbon and strangely, or not so much, to Santarém. We know the dedication of Afonso Gualdim Pais, Grand Master Templar, who tried to “push” the king in that direction as well as in building fortifications and defensive consequent consolidation of the Portuguese territory. Gualdim Parents have been since very young, educated and knighted by the king himself.

Coming from a family belonging to the nobility, born in Braga, immediately after the conquest of Lisbon with only 22 part to the Holy Land, to fight for the Faith.
Already in 1156/57 if signals its presence back to Portugal, in the giving that makes you the King of several houses and farms located in Sintra, and the time already a Templar master.

This Order was a key to the nation’s founding. Fought alongside Afonso Henriques, leaving impressive marks on the secret history of Portugal, which would not have been what it was without the Templar presence.
In winter 1159 Afonso makes donation to the temple of Ceres Castle, as compensation for the rights granted to Lisbon Cathedral, the church income that the Templars, had obtained by real donation when the conquest of Santarem in 1147.

This change meant, not the reconstruction of Ceres Castle, but before building another further south, the Tomar, which becomes then the order center in Portugal.

The Cistercians settled in Alcobaça and played an important role in the history of our country, whether the level material and spiritual level. Unlike own image of what transpires Bernardo, were not passive and contemplative; action were monks who turned mentalities, lent new techniques in agriculture, architecture, sciences, in addition to providing a powerful mystique that intrigued almost as much as the very Templar mystique. It is this mystique that enontra after the foundations of the great Lusitanian maritime project. The Portuguese Discoveries.

As we know, after the fateful 13 October 1307, there was an “exodus” of the Order to the country where he found support in D. Dinis, that to avoid a direct conflict with the Pope, changed the Order name to Order Christ. Had to leave Tomar and went to Castro Marim from which they returned to the parent still in the fourteenth century. From here begins the scientific preparation and mission of discovery.

The Portuguese maritime epic had, contrary to what most think (profession of sailors minor interest in the arts to discover lands beyond the sea) a different nature than any other European people. The Portuguese captains were elite people highly prepared scientific and military level and with a huge moral and spiritual strength … many of the top elements were the Order of Christ.

As soon as can be seen in the behavior of these and assuming as compared our Spanish neighbors, who to send the Pizarro adventurer to America, rather than well prepared admirals gave the massacre of the Incas, and subsequent loss of much of their culture and traditions … as has also made Cortez with the Aztecs in Mexico.

But we entered the founding of the nation and the relationship between D. Afonso Henriques and the Templar order …. until the first royal seal of Dom Afonso Henriques seems to hide a message to this Order. Indeed, we can see in the accompanying drawings, the arrangement of the letters forming the word “Portugal” can be decomposed into “Por Tu Gral.”

Another best known seal, takes the same decomposition of the word Portugal in the same three shares, divided again by Patea cross. This same stamp shows today some of the currencies of 1, 2 and 5 cents of our country. 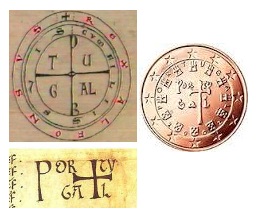 Knowing the interest of the Templars by the coded messages, and being himself a member of the Order, it is possible that D. Afonso Henriques has used this medium to transform the name of his kingdom in a currency that was obviously dear to him: “Why Tuo Gral”: for your Grail!