The tombs are of gothic style and made of limestone of the Coimbra region.

The early location of the graves was side by side (while Inês on the right side of Pedro, what should happen between husband and wife) in the southern transept Alcobaça Monastery Church. It went to the room of the Tombs. In the twentieth century were again placed in the transept of the church, which currently: face to face, with the tomb of D. Inês in the north arm of the transept and the tomb of King Pedro I in the south arm, so that when they rise to stand up and see each other.

In prostrate both figures are crowned, peaceful expression and surrounded by six angels to them settle down and raise the garments their heads (as that elevate them to Heaven). The faces of the sarcophagi are decorated with heraldic theme (representations of coats of arms of their families), biblical, vegetal and geometric. In sculptural terms, the tomb of King Pedro I is considered a better work, reaching the reliefs reaching 15 cm depth, while at the grave of Dona Ines reach 10 cm.

Tomb of Inês de Castro – Last Judgment (Alcobaça Monastery)Inês de Castro is represented with a clear expression, surrounded by angels and crowned Queen. The right hand touches the tip of the collar that fits him the chest and the left hand, gloved, holding the other glove.

In this tomb stresses yourself a facial, which is the Last Judgment. It is thought that Pedro, with the representation of this dramatic scene of the Christian religion, wanted to show everyone (including his father and killers) that he and Agnes had a place in Paradise and who made them suffer so much could be sure would enter the maw of levitation represented in the lower right corner of the face. We can also see the figure of Christ enthroned, and the Virgin and the Apostles to pray on your right. Below are represented the dead who rise from their graves to be judged.

Tomb of King Pedro I

D. Pedro I is also represented with a clear expression, crowned and surrounded by angels. Hold the handle of the sword in his right hand while the left grabs the hem.

1 Inês caresses one of the children;
2 The couple lives with their three children;
3 D. Inês and Pedro play chess;
4 The two lovers are shown in suit life;
5 Inês subdues one prostrate figure on the floor;
6 Pedro sitting in a grand throne;
7 D. Inês taken aback by assassins sent by King Afonso IV;
8 Inês debunking one of his murderers;
9 Sticking Inês;
10 Inês dead;
11 Punishment of Agnes of murderers;
12 D. Pedro I wrapped in a shroud. 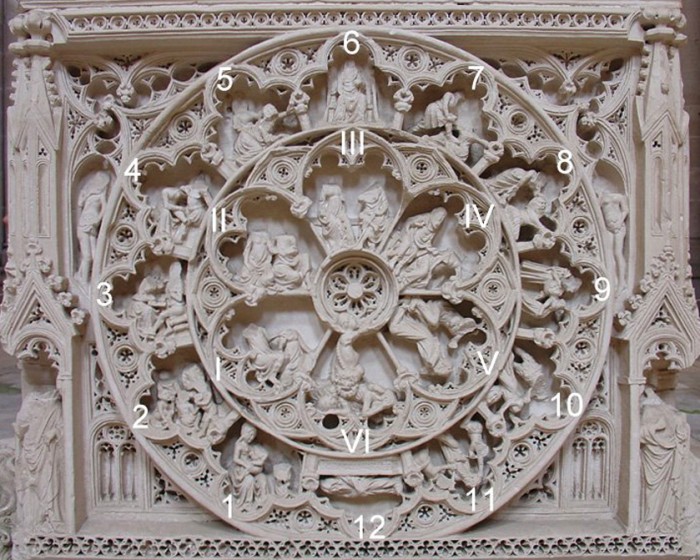 In the interior aedicules – Wheel of Fortune – we can see (in the same sense the Wheel of Life):

I Inês sitting to the left of D. Pedro (for not being married);
II The couple exchange position (Inês sitting to the right of D. Pedro, which indicates that they are already married);
III Pedro and Inês sitting side by side like an official portrait;
IV D. Afonso IV to expel (by finger pointing) Ines of the kingdom;
V Inês repels a man who seems to be again D. Afonso IV;
VI Pedro and Inês lying on the floor overwhelmed by the hybrid figure of Fortuna holding hands the wheel.